There were some interesting reactions to my last blog on the College of Physicians and Surgeons of Ontario (CPSO).  The most common (private) comment I got of course, was from colleagues saying they really liked it, but were too scared to share it in anyway on social media.  They didn’t want to be targeted by the CPSO.

The one comment that really stood out from me was by Dr. Darren Larsen, currently the Chief Medical Information Officer at Ontario MD.  Dr. Larsen wrote, “As professionals, why don’t we just treat each other with the same kindness and respect we would hope to be treated with by our peers and thereby stay completely off the CPSO radar screen?”  Dr. Larsen is right of course.  Having met him, I can also say that Dr. Larsen is genuinely one of the nicest people I know, and he absolutely always seems to live his life by the credo of being kind and respectful.  I’m happy for him that he’s able to do that.

Unfortunately, we are not all able to balance our lives like he has.

Currently physicians are overworked from trying to keep the health care system afloat.  When you crunch the numbers, Ontario has about 2.2 physicians for every 1,000 people.  In comparison, Germany has 3.8 physicians for every 1,000 people.  Heck even Bulgaria (!) has more physicians per capita than Ontario.  Coupled with an aging population and increasingly limited resources and bureaucratic inefficiencies, this leads to a significant increase in workload.  Physicians in Canada currently work over 50 hours a week plus call of between 20-25 hours a week.

The results of this crushing workload is entirely predictable.  The Medical Post recently did a survey on the best Province to practice medicine in.  My thanks to Dr. Dennis Kendel for tweeting out the chart below: 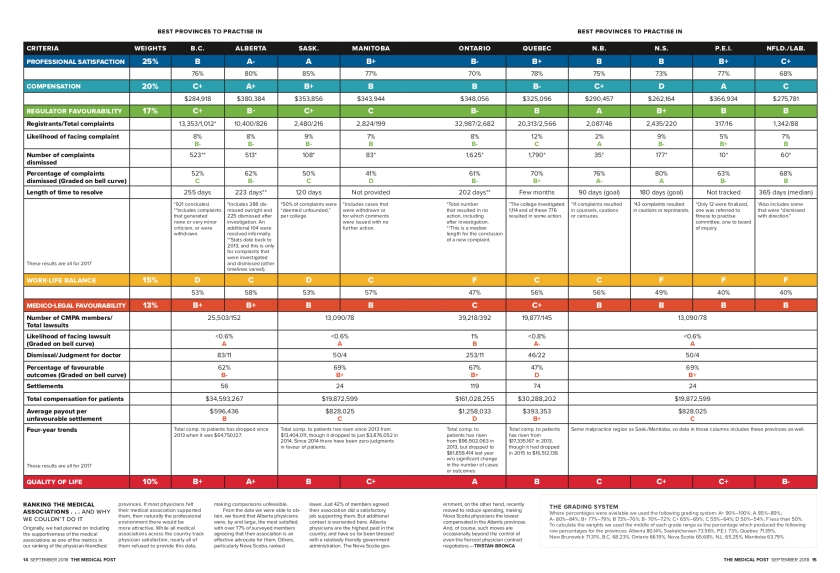 The most telling line is the one on work life balance.  Not a single province scored higher than “C” on this one.  Four provinces (including Ontario) got “F”.  A most telling table that gets to the heart of the issue of physician burnout.

Being human, physicians of course are subject to the same flaws as everyone else.  They don’t like to admit it mind you, but when the work/life balance gets skewed, physicians get irritable, depressed, make mistakes, and yes, say dumb things on social media that they wouldn’t otherwise.

More recently, I have noticed this irritability turn into anger amongst physicians.  In Ontario, physicians are going on over five years without a contract.  While we are still getting paid, the uncertainty of the situation is weighing on us.  Middle aged to older physicians are feeling the effects of years of mistreatment by the previous government and getting increasingly bitter with each passing day.

Even younger physicians have been affected.  Many trainees that I’ve spoken to (I’m a preceptor with the Rural Ontario Medical Program) are uncertain if they’ll be able to practice.  Turns out that despite an aging population, Ontario has unemployed physicians.  The situation is particularly acute in family medicine, where the government unilaterally slashed the number of Family Health Organization spots in half, leading to a new crisis in Family Medicine.  So even newer docs are feeling bitter.

I worry a lot about my colleagues.  We all know that making decisions out of anger and bitterness will generally lead to bad outcomes.  This applies equally to whether we are making decisions on patient care, or on issues like contracts, negotiations and especially medical politics.  We must base our decisions and actions on facts, and not frustration, no matter how justified that frustration may be.

Dr. Larsen also wrote: “….it is a privilege to be part of a self regulated profession. With that privilege comes responsibility.”  Again, absolutely a true statement and one that is hard to argue with.  But I happen to feel that the responsibility should apply not only to ourselves as individuals, but to regulatory bodies like the CPSO and also to member organizations like the OMA.  The OMA is planning a Task Force on the burnout issue, and will hopefully make some meaningful recommendations that can help with this issue.

To my colleagues, I once again ask that you do your best to look after yourselves.  Eat right.  Exercise regularly.  Take regular breaks from work.  Don’t feel guilty for taking a day off now and then.  Ask yourself if the decisions you are making are from anger, or based on facts.  Above all, try to be kind to your fellow colleagues.  They are probably feeling just as frustrated as you are.

Practicing rural family medicine since 1992. I still have active privileges at the Collingwood Hospital. Immediate Past-President of the Ontario Medical Association. View all posts by justanoldcountrydoctor

One thought on “Anger Leads To Bad Decisions”